The Rune Blade – a Fantasy Piece on Edge

Make a rune blade for the sheer joy of it. And it looks great, too. Is is another one of my fantasy pieces, and one that inspired a different direction for the flavor piece(s) I made for the first one. Enjoy, and remember to be inspired! Videolink! Keep on reading for more images of the finished blade, a vague hint about the new flavor solution, and some thoughts on my video making process!

Beauty of the Runeblade

I really like how the black tea and rust treatment turned out, especially on the serrated parts. It gives the whole blade kind of an organic look, and it fits in quite well in the narrative of a metal-like blade grown out of wood. You could even mistake it for some kind of grain at the edge. 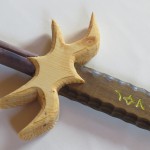 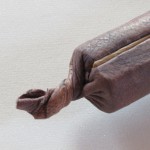 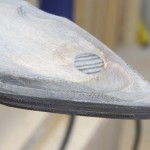 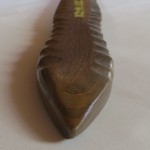 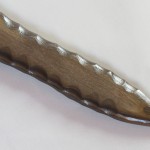 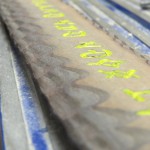 I have hinted at this before, and I am not prepared to come out with a complete announcement, but you probably all know about my concept of Fantasy Pieces (If not, check out the Primer, the Root Beast and the flavor piece, the Royal Decree). Obviously, this rune blade fits this category if nothing else, but I have had problems with the concept after the first incarnation – not problems as far as ideas and execution goes, but regarding the flavor pieces. The idea is to embed the items in a story, give them a background and link some “baggage” to them that will reverberate whenever you gaze upon them. At least in a manner of speaking. While I try to make these items as interresting as possible from the woodworking side, I do not expect anyone to actually set out to replicate a piece that I made. My goal is to get people to think outside whatever boxes they find themselves in, and to introduce them to another way of thinking. So much for the intention. In practice, I found it hard to come up with flavor ideas that work within the confines of a video. Most of those are pretty generic. “The Horn of King Woodwor I” might sound interresting for the Pallet Horn, at least at first glance, but then what? I could tell you about his adventures or how the horn was made, but how would that be special? Now, if you already knew the background, say, the rise and fall of King Woodwor I, then the horn might make more sense to you with little effort on my part. I do not mean to avoid work here, but it would quickly get boring if I wanted to stuff too much information into a single flavor piece. It would quickly become too complicated. So what am I aiming for? One idea I toyed with was creating a complex world, similar to a campaign setting for a roleplaying game. That would include langs, towns, places, characters and history, and that would quickly become overwhelming, too. So I canned the idea. Then I realized, I might get away with that if I go slower rather than faster. Sounds absurd in a way – I am worried that presenting a lush setting in a short video is too complicated, but soind the same over multiple videos is supposed to keep people interested? No. And Yes. Because the operative word is “multiple videos”. I got the idea to combine the flavor pieces into a kind of serial, not just as in a sequence of videos but in the literal sense, a story told over a number of episodes. Sounds bold, right? I sure hope so, since this is part of the idea. But rest assured, I will keep the woodworking coming. And this will also allow me to unhitch Fantasy Items and Flavor Pieces, producing Fantasy Pieces whenever I have time and incorporating it into the serial later. If that sounds too far out for you then you will be glad to hear that this side-project will get it’s own channel, so if you are in it for the woodworking (a completely sensible predisposition), you will not be bothered with these tales and their probably artsy implementation. Once again, there will be more announcements when the time and I are ripe.

This is the last video I made with my old camera, as you can probably tell. Well, I hope you can. But this was also one of my longer projects in terms of the time it took from the first shot to the final publication. The reason for that is by no means the complexity of the build (which could be argued), but the video editing process. I do not want to get into great detail here, but as a result I started planning my videos. Not just planning what I want to do, but how I am going to do this. To that effect, I cobblet together a form of sorts where I will take down – yes, with a pen – my ideas and notes. The main idea is to cover all my bases. You might have noticed that I uploaded a video with audio only on the left side a few times, and that is how my old camera used to record videos. I hope I will not have this problem with my new piece, but there is actually a simple fix in my editing software for that – I just forgot to apply it. So this form is giving me a way to keep track of all the things I want to put links to in the video, all the stuff I need to do voiceovers for, and all the steps necessary to publish the video right. I am still as the arbitrarily names version 0.1, but I already had some success with this in the planning stage, in thinking about the steps necessary to make a certain project alone. It will help me reduce unforseen pitfalls (if I could avoid them alltogether they would not be unforseen), and hopefully cut down on scenes that I cannot use in the final cut. A guy can dream, after all… So, we will see how much that helps in the future. This video has not seen this new form, so it will take some time for this improvement to trickle through to the end user – if it helps at all. So thanks for reading, and for watching!