Playbutton made from Petrified Wood – Wards off Thumbs down!

I have been meaning to make a play button akin to those that YouTube is sending out to those really successful according to the numbers. And after I got my hands on a piece of petrified wood I realized that with its “cultural heritage” this jet is the best material for this project. Enjoy, and remember to be Inspired!

This material is remarkable not only in the fact that it is pretty hard and not a fun thing to work with, but also because it produces the nastiest dust I have ever experienced. Not primarily where health is concerned – although I would not breathe it in if I could avoid it, either. It covers everything and sticks, and neither dust collection nor an air gun will make short work of it. The inside of my dust collection hose was coated with the stuff for weeks afterward…

Still, this material is worth checking out, if only because of the emotional baggage that it carries with it. It is old – possibly older than anything in your shop if you go by the current state things are in. Imagine the jet telling everything else in the shop that “it has been dead wood long before anything else in the shop has even put down roots”. And it has been credited with magical properties, which you probably know is something I fancy (even though I do not actually believe in it. Sadly, I am still getting thumbs down).

Back in the day of superstition, people believed that bad luck was the result of curses, and one such curse was the evil eye. I am not sure whether that required more than a person feeling that you looked at them the wrong way, and it probably was not a good thing to be involved in on either end. But they believed that jet had the property to ward a house against this curse’s effect. And pragmatic as superstitious people tend to be, they combined the jet with other symbols. For example, they would hang carved crosses on their doors to safeguard the house.

If you are interested in jet, I got mine from the German site Lederkram.de. They also have a good selection of turning wood and leather, plus a lot of interesting stuff for the roleplayer in you. But apparently, for now, they are all out of petrified wood.

If you liked this video, check out the other projects I have made. If you are more into the slightly less normal, you can find some of that with the weird stuff. And if you enjoy what you see please subscribe to my newsletter so you never miss a new release.

Thanks for stopping by, and remember to Be Inspired!

Subscribe to my newsletter and never miss a project again!

How do you want to be Inspired today?

Find what you are looking for:

Wand Box with the Help of ShadowFoam

Magic is dangerous, and I won’t let a stray wand shot give me away – even though it was not even really me who demanded the duel. So I decided to make something to hold Read more… 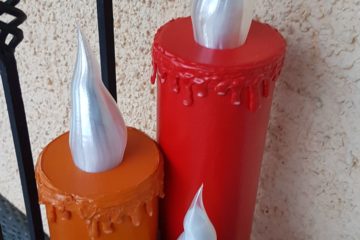 Late for Christmas (as is on brand) but still a viable decoration option, I give you the giant porch candles! They replaced the Death of Rats as our front porch decoration this Christmas. I especially Read more…

I give you an inside-out turning. Something that incorporates blue amber for no reason other than that it is interesting. This is this year’s Christmas ornament. This also has a Wand in it. And that Read more…

Subscribe to our newsletter and never miss a project again!

We respect your privacy more than tea light holders (and if you know me you know that is saying something!)