Of course you need actors to do an animation, and with regards to the overall theme of the project, they should be made of wood. After trying a few things I ended up using the Woody mechanism that Steve French used for his little shop companion and his large bird-eating counterpart Chip. I also included my first crude animation atempt. Enjoy, and remember to be Inspired!

So what did I learn?

Like I said, it was my first animation, and as such there are many things that were new to me, and many things I would do differently next time.

For starters, of course, I did it on the fly and rather out of a whim, so there was no real controlled environment for it. Most obviously the lighting was far from perfect, and I keep casting shadows on my impromptu stage.

So the first thing I will do in the future is to make sure that the lighting is adequate and, no matter what I do to actually light a scene, I will make sure not to influence it between shots by casting shadows or even by light reflecting from, say, my red winter workshop coat.

Another point is the number of pictures I took. Obviously, I took way too few, Then again, I also kept bouncing into things, and had no means of checking how far I had moved a piece – not to mention that glue residue made that even trickier, plus the balls would not stay still every minute step of the way. In effect, taking more pictures probably would not have improved the overall style of the result. I will keep that look in mind, though, and maybe I can use it as a deliberate effect in the future.

And of course I will set my camera to take pictures in the same format as it records videos, just to avoid any scaling issues – even though the black frame on the test piece was of course fully intentional and very artsy.

Most of this may be obvious when you think about it, but not only do I think that actually trying it out makes for a better learning experienve, but I also believe that you cannot think about things that you either to not realize are issues or that you take for granted.

Thanks for watching and reading, and remember to be Inspired!

Greetings Inspired Ones! For starters, I have decided to move this over to my homepage. Patreon is all well and good if you feel what I do warrants a buck a month, but the argument… Continue Reading Weekly Update 25.11.2020 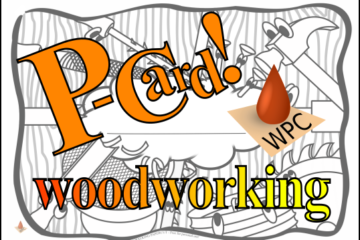 The P-Cards are more than just a pun (“Make it so!”). They are little helpers to increase your productivity, but potentially also the fun you have! They come in different flavors for different kinds of… Continue Reading P-Cards! Color me Productive!

Greetings Inspired Ones! I managed to finish a video! I am still not at the top of my game when it comes to sharing it properly to nudge the algorithm, but at least I got… Continue Reading Weekly Update 18.11.2020