While Garden Gnomes are enough to repel your basic zombie attack, they fail when the undead come in force. So to keep our house, our brains and, apparently, our cookies safe, I need to enhance our protections – with a tree! Enter the Gigatorch!

The Gigatorch, or actually the Giga-Torchwood, is a plant boss in the game Garden Warfare 2. It is part of the Plants vs. Zombies franchise, and it is a plant “hero” character that helps protect the plants and their stronghold against zombie attacks.

There also was a Torchwood in the original mobile game, where it was simply a perpetually burning tree trunk. Its purpose then was to set peas shot over it (by pea shooters, obviously) on fire to deal extra damage to the incoming undead. I assume that is the reason why the Gigatorch is burning in the newer game. When enraged, the flames turn from orange to blue, too.

In a recent update, a playable version of the character has been added, but frankly, I have not yet gotten that far.

If you are familiar with the game, you probably noticed that I took the liberty to not replicate the gun-arm and instead replace it with another hand. The main reason for that is that, frankly, I missed the fact that the Gigatorch does not come two-handed, but I also came up with a better explanation. 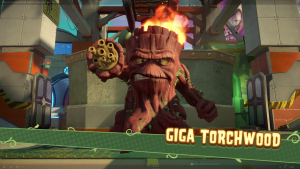 I think it looks better with two hands, less aggressive and more joyful, which is the main idea of making it a front porch centerpiece (or at least a supporting actor). I believe that 99% of passer-bys have never even heard of the game, at least not of Garden Warfare.

And last but probably also least, the arms are much easier to articulate as they are – stretched out in order to deliver a punch or at least to threaten zombies. With a gun, I would at the very least assume that the arm would have required an elbow joint to look believable, and as it stands, the Gigatorch is already threatening enough.

If you enjoyed this video check out the other projects I have made inspired by pop culture, as well as my other projects in general. You can also find slightly more weird stuff here. If you like what you see subscribe to my newsletter so you don’t miss a new release.

Thanks for stopping by, and remember to Be Inspired!