There it is, my entry for the 2014 Whirligig Wars. As glimpsed in Tooby’s Poem, it is a dragon in flight, beating it’s huge wings to escape a dark and menacing storm front in search for… Well, I could spin the marketing speech around hope and inspiration further, but I do not want to overdo it – if that is still possible.

Lets I forget, I used Matthias Wandel’s GearGenerator to make the gear template.

Like I mentioned in the entry video, I did record over seven hours of video footage during the build, including several design iterations that I had to scrap for several reasons. I will go into more detail in an upcoming post, but the gist is that I cannot make a proper build video about this without blowing the video length up, and even so I think it would be pretty boring.

Right now I am sorting through those files – 73GB to be precise – in order to pick out the interresting and important bits, but that might take a while, especially considering that I have other projects in the works that were forced on the back burner by the need to get the Whirligig done in time.

I am hoping that there will be more entries yet, not only to support the good cause of the Make-a-Wish foundation but also for the sheer amount of inspiration that each and every Whirligig I have seen brings to the table. So join while there is still time! And yes, I have another Whirligig of sorts that I am working on…

As always, thanks for reading, and for watching! 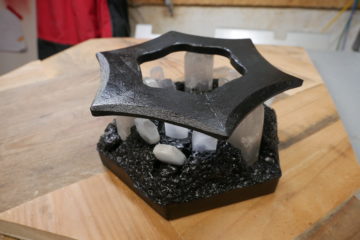 Selenite is an interesting material to work with. Tea Light holders are interesting things to make. And ancient evils are better left bound and banished in whatever infernal dimension they dwell. Combining all those three… Continue Reading Selenite Tea Light Holder – Banish Ancient Evils in Style 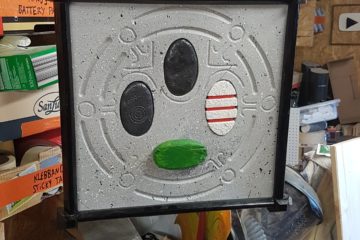 We made it! This is the last part of the Remote Monolith Trilogy, which makes this part three. Enjoy the frame and a surprise fourth Monolith remote in this video that bring this project to… Continue Reading Monolith Remotes – The Finish! (Part 3) 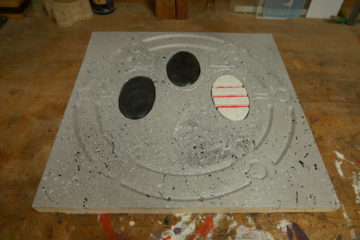 Monolith Remotes – Back Board (Part 2)

I give you the next step(s) in my Monolith Remote project – the monolith remote back board! It took – once again – longer than anticipated, but I managed to get part 2 of this… Continue Reading Monolith Remotes – Back Board (Part 2)